Law & Culture, as a discipline, offers a challenge to legal theory. With all the virtues of Law & Economics or Law & Social Science more generally, the principal vice is to reduce understandings of law to prosaic models, whose power comes from their razor-sharp and ineluctable logic.  Culture provides context in all its richness, adding humanity and agency to more dismal prognostications. Law & Popular Culture revs up the power by expanding context beyond the “sweetness and light” of culture; the polychromatic street becomes juxtaposed against the monochrome architecture of Blind Justice.  This new volume exploring law and justice within Japanese Popular Culture, where the quietude of Shinto temples give way to the mania of robots gone mad and nature, chaotic.

Two insights motivate this edited volume. The first is the understudied world of comics. Law’s obsession with text ignores the visual in favor of the verbal despite the markings of words serving as symbols of meanings. (See my previous blog post on Professor Giddens’ volume on comic books and the law.) The second motivation is the curious belief that social organization in Japan rests on culture rather than law. What the editors seek to show through this collection is the pervasiveness of law, as understood from the Western perspective of H.L.A. Hart, in Japanese popular culture. By turning to the overlooked domain of comics, the editors find a mirror into the presence of law in Japanese culture.

My immediate response to this project was to wonder why it is necessary to situate law in popular culture.  The anarchy of popular culture is enjoyable enough without the intrusion of law and, heaven forbid, jurisprudence. It struck me as presumptuous to even try to find Hart’s presence within anime or manga. But the project has its twists, and identifying law in Japanese popular culture speaks to the Western understanding of law. To say popular culture undermines law is too simplistic. Instead, popular culture opens up law to embrace the need for justice.  A consideration of the following five topics from this rich and dense volume will illustrate these points: (1) the movie Ringu; (2) Miyazaki’s version of Nausicaa; (3) Pokemon; (4) otaku, or fan fiction; and (5) image characters in Japanese graffiti. These five examples trace a journey from hopelessness to justice through the territory of Japanese popular culture.

Penny Crofts and Honni van Rijswijk, members of the Faculty of Law at the University of Technology, Sydney, uncover a tale of infinite regress and lost foundations in the Japanese film, Ringu, the basis for the American movie The Ring.  A video clip replayed, a curse reworked, and a monster unleashed are at the core of the film about a girl’s transformation into a demon who is unleashed on unwary viewers. The distribution of the clip is a chain that never ends, drawing the viewer in emotionally and literally as characters trapped in a cycle of demonic reincarnation. Karma, however, seems to have no sway. Repetition serves no purpose of growth or transformation. Watching the video is a Sisyphean task with the rewind and play buttons caught in an endless loop. The authors remind us that law, according to Hart, is about foundations and breaking the law, a transgression of law’s boundaries.  The endless loop of Ringu is a reminder of the lack of foundations for determining law’s boundaries. One acts to break the cycle solely to escape.

Nausicaa saves Odysseus from his meanderings but also is a source of unconsummated passion. For Miyazaki, Naussicaa is a girl warrior fighting demons in the post-apocalypse of the Valley of the Winds. The Nausicaa of Greek epic and the Nausicaa of Japanese epic are heroic in their own specific domains. Professor Thomas Giddens of the University of Dundee sees the domains as heterotopias, places of difference that reflect onto a utopia impossible to inhabit. Within these heterotopias, humanness gets defined in opposition to nature through interactions with the other. From these actions arise the possibility of hope. Nausicaa of Miyazaki contrasts with the cursed demon of Ringu. Like the Nausicaa of Homer, Miyazaki’s rendering guides us back home, away from aimless meandering cycles, perhaps to justice.

Professor Giddens’ essay does guide us to Dale Mitchell’s insights on Pokemon. A PhD. Candidate at the University of the Sunshine Coast, Mr. Mitchell takes us into the world of videogames with its own boundaries of rules, logic, and law. Players capture and tame the Pocket Monsters, but the quest and trapping is not as ominous as those in Ringu.  The law of the game is the reminder of the game of law. While the interplay of game and law is perhaps a happy alternative to the loss of foundation and boundaries in Ringu, Mitchell reminds me of the dark side of law as game: the sense that the game is rigged. Pocket Monsters may be tamed, but their capture reveals how the game is about domination and control. Law is about power with the rules of the game written by the powerful, which in the case of Pokemon are the human captors. Recognizing law as a game underscores its lack of foundation, returning us to the monsters identified in Crofts and Rijswijk’s deconstruction of Ringu. But Mitchell takes an optimistic leap, away from the battle between monsters and humans. He directs us to the pursuit of a “higher justice beyond personhood.” To recognize law as a game leads to justice to fill the void.

But what does justice mean?  My take is that justice rests on action, perhaps some modern rendition of the “good works” from a long forgotten theology, but expressed more palatably, in modern terms,  the need for action and connection within a modern sense of community. Otaku, or fan fiction provides one model. Image characters in Japanese graffiti provides another.

Professor Yuichiro Tsuji of the Graduate School of Humanities and Social Sciences at University of Tsukuba delineates the boundaries between copyright law and the Japanese Constitution and the implications for courts and legislative politics in his chapter on otaku. When fans create their own works drawing on characters and elements from favorite copyrighted works, they are engaging in a transgressive act.  By crossing the boundaries of copyright protection, creators of fan fiction ask readers to rethink not only the transformed original but the meanings of authorship, creativity, and expressive freedom. Copyright legislation offers little guidance especially as fan fiction forces a legislative politics to respond to the battles between copyright owners and creative readers. Although it would be an exaggeration to say that a monster has been unleashed, the battles over fan fiction result in a recursive redrawing of lines between the rights under the Copyright statute and rights under the Constitution. Whether there is convergence to a stable set of legal boundaries is an unsettled question. But the lesson is that the act of creating fan fiction is a gasp of expressive freedom within the constraints of copyright. Perhaps those creative acts are the best ways for realizing justice in an otherwise constraining set of legal rules.

The image characters of Japanese graffiti art represent the transgressiveness of much street art. Vandalism or creativity? Intrusion or invitation? Professors Peter Rush and Alison Young of the University of Melbourne conclude the edited volume with reflections on how image characters.  Their examples of the saiban-inko (see below left) and Pipo-kun (see below right) show how graffiti reworks images of criminal justice in public spaces.  The saiban-inko bird image is a creation of the Fukuoka High Public Prosecutors Office and serves as a mascot to educate the public about the criminal justice process. A pervasive character in street art and in consumer merchandising, the bird figure invites public participation as well as providing transparency of the judicial system. The animal image humanizes the criminal process, echoing the taming of Pokemon and the escape for the monster demon of Ringu. The Pipo-kun and family serve as the mascot of the Tokyo Police Force and their presence as seemingly random street art captivates while reminding the public of the ubiquitous presence of the police. Surveillance becomes internalized through the embrace of the image. 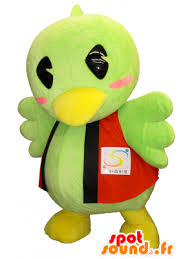 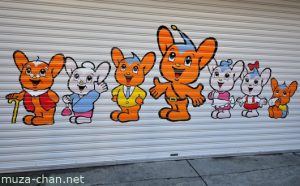 The image art provides a vibrant coda to this edited volume. Law has tamed nature and imposed its own order. For the viewing public, the law’s presence in image creates boundaries that are inescapable, providing satisfaction from a desire for justice.

These five chapters are a sample of the rich materials collected by Professors Pearson, Giddens, and Tranter as editors. I encourage the reader to delve more deeply in these and the other excellent essays. But the trajectory traced by the sampled essays in this review confirms popular culture’s capacity to enrich our appreciation of law, even as it only approximates a deeper sense of justice. 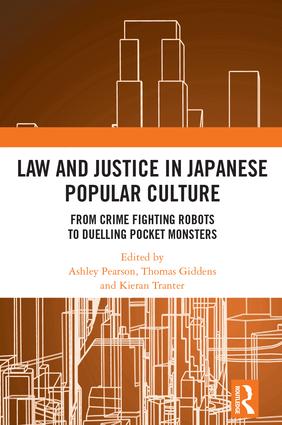 Shubha Ghosh is Crandall Melvin Professor of Law, Syracuse University College of Law and a member of the Hedgehogs and Foxes Board of Editors.

[N.B.: Professor Ghosh received a free copy of  Ashley Pearson et al., Law and Justice in Japanese Popular Culture, from the publisher, Routledge, in exchange for his honest review.–Ed.]